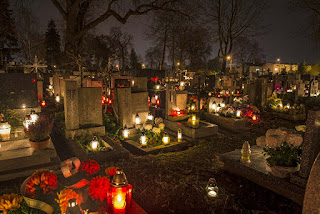 After this I saw a great multitude, which no man could number, of all nations, and tribes, and peoples, and tongues, standing before the throne, and in sight of the Lamb, clothed with white robes, and palms in their hands: And they cried with a loud voice, saying: Salvation to our God, who sitteth upon the throne, and to the Lamb. (Apoc. 7:9-12)

The excerpt from Sacred Scripture, above, comes from the Epistle on All Saints' Day. I was pondering the readings during Mass, on Friday night, and I was struck by this paragraph.

Modern scholarship, and I say that with contempt, tries to dismiss and downplay the Book of Revelation by saying that it was already all fulfilled in the first century or shortly thereafter. In the above selection the Holy Spirit is telling us that members of all nations and tribes and peoples - from the Arctic to the Amazon, from Norway to South Africa, from the Ural Mountains to Australia - will have been baptized, received into the Church and died in a state of grace. That, of course, could not have been possible in the first two centuries of the Church. In essence modern scholarship is trying to make a liar of the Holy Ghost. Quelle surprise.

But the Holy Ghost has been proven to be correct, hasn't it? Before the discovery of these new continents, while the Christian faith was still localized in a few countries in the Middle East and Southern Europe, Scripture proclaimed boldly: a great multitude of all nations, and tribes, and peoples, and tongues will stand before the throne, justified by baptism and faith.

And that prophecy came true. The chutzpah of this small tribe of believers, poor, hunted, killed, proclaiming that every nation in the entire world will have baptized believers is amazing. But chutzpah when backed up by the Holy Ghost is not chutzpah at all - it's just reality on the horizon.