A Central Mystery of The Book of Revelation, Explained 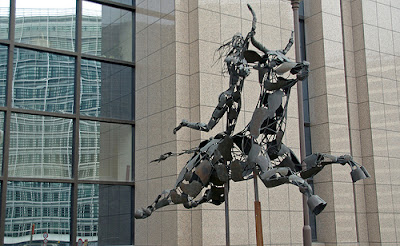 And I saw a woman sitting upon a scarlet coloured beast, full of names of blasphemy, having seven heads and ten horns. And the woman was clothed round about with purple and scarlet, and gilt with gold, and precious stones and pearls, having a golden cup in her hand, full of the abomination and filthiness of her fornication. And on her forehead a name was written: A mystery; Babylon the great, the mother of the fornications, and the abominations of the earth. (Apoc. of St. John 17:3-5)

I am in Brussels, Belgium as part of my sojourn through Western Europe on a mix of business and pilgrimage. I had arranged to meet an educated man, someone who is well-versed in the history of Europe, someone who teaches at a University, outside of the EU Council of Ministers building. I had asked to see the statue above, of a woman riding a beast.

The afternoon wasn't a complete loss. Over lunch this gentleman made it absolutely clear to me that St. John was describing Europe in Chapter 17 of his Apocalypse (see excerpt above). His certainty was absolute.

Europa, a figure of mythology and the figure by which Europe is named, was known to educated people of the ancient world. The story was well known: Europa was kidnapped and seduced by Zeus (in the form of a bull) and they married. Europa is the woman, the continent, and the bull (Zeus) is the pagan god that gives the marriage power and life.

My lunch guest told me that St. John used the imagery of the woman riding the beast because other than saying "Europa" it was the clearest way of saying the continent of "Europe." It would be the equivalent of me writing about Michael Jordan and saying "#23 of the Chicago Bulls" rather than "Michael Jordan." Everyone would know what I meant. And in St. John's time, and for generations after, everyone understood that he meant Europe.

By painting a picture with his words of Europa riding a beast, St. John was telling us that in the last days Europe would form a marriage union with another spiritual power, like she first did with Zeus and then with God. She is a "harlot" because she abandoned God, who gave Her all of Her strength, knowledge and riches, for this new lover, this new spiritual power, this beast. By its description St. John clearly means Satan.

I am still processing the ramifications of this information while reading Chapter 17 multiple times. It makes the whole chapter incredibly clear and being here in Europe, having visited London, Munich, Paris and Brussels, it's like watching Revelation play out in front of my eyes.

The European Union chose to put that statue, of a woman riding a beast, in front of its Council of Ministers building. It's reasoning was the story of Greek mythology that I just explained. But the people in charge are versed in the classics - they know that a woman riding a beast is foretold in Revelations.

And they don't care. They worship a different god now. I wouldn't be surprised if that statue wasn't inside one of the European Union buildings, safe from people like me, or moved into a Freemasonic lodge.

These are the same people that did this: 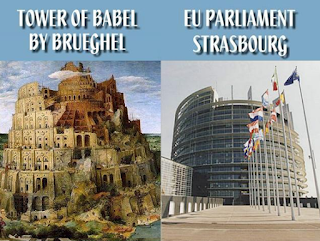 They want everyone to know about their new marriage.