Benedict is Going to Die Soon - And That Changes Everything 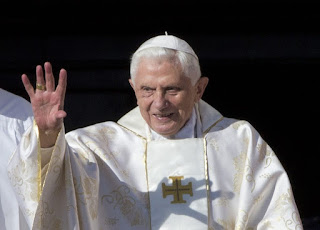 And now you know what withholdeth, that he may be revealed in his time. For the mystery of iniquity already worketh; only that he who now holdeth, do hold, until he be taken out of the way. (2 Thes 2:6-8)

I believe the institution of the papacy - Peter - is the "he" that St. Paul referred to above.

Jesus Christ appeared to St. Peter after His resurrection, when all of the Apostles were gathered together, and in private asked him: “Simon son of John, lovest thou me more than these?” (St. John 21:15) The "these" that Our Lord was referring to were the other Apostles that had gathered. Christ confirmed that because Peter loved him the most - "more than these" - it was his responsibility, through perpetual successors, to feed His lambs and tend to his sheep. He also told him that he would have the honor - the only Apostle that it was granted to - of dying by Crucifixion, in the same manner as Christ. This was both a sign and a symbol to the universal Church of the authority and power that had been given unto Peter.

What happens when Peter is gone?

Benedict is 92 years old. He is not well. He does not have the right to leave the Vatican to visit friends and family. He is a prisoner within St. Peter. He is the last person to have been blessed with the powers and protections of the papacy. He will die. I suspect it will be soon.

There is an entire den of hyenas waiting to pin multiple scandals on Pope Benedict once he is dead and unable to defend himself. Francis has surrounded himself with amoral greaseballs, and among other things, amoral greaseballs are so easy to predict because they will always choose the path of maximum depravity.

They will seek to pin all of the financial and sexual storms currently battering the Vatican and waiting ashore to make landfall on the deceased Benedict. They will use these scandals of amoral sodomites and apostates to go after the supporters of Tradition in the Church.

Benedict's death is going to be a watershed moment in the history of the world. It will leave a man sitting in Peter's chair who holds none of Peter’s powers, protections or authority from God with no rival claimant. I do not believe the Bishops have the courage to call an "imperfect council" upon Benedict's death and elect a successor. They will continue to pursue their specialty: doing nothing and cowering.

Without a successor to St. Peter alive - with the protection given to the Church by his presence and the graces to the faithful of his prayers - in the world we can expect an outpouring of malice and evil on the world. He who has held evil at bay will have been taken out of the way. What happens next can only be trials and tribulations for humanity, who is the Devil's ancient enemy, living as most of us do without invoking the name of God for protection and guidance.

What difference does it make if a man who does not exercise the active office of the papacy is dead? What visible difference will you and I be able to see?

At first, none. We will visually see no difference. But spiritually we will be able to feel it. In the same way a spiritually attuned person can sense malice and evil in those who serve the Devil we will be able to sense that something has just gone terribly amiss. It will be a similar feeling that millions got when they first saw Francis wearing white in March 2013.

Perhaps that will spur even greater numbers to take up resistance to the non-believers who currently have authority in the Church. I do not doubt the ability of God to turn a huge negative into an overwhelming positive. But what I do know is that nothing will ever be the same.
at November 23, 2019
Email ThisBlogThis!Share to TwitterShare to FacebookShare to Pinterest
Newer Post Older Post Home