Forgive Others With All of Your Heart Or Risk Going To Hell. Jesus Makes It Clear: The Choice is Yours. 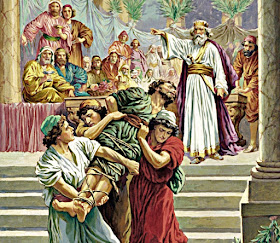 Therefore is the kingdom of heaven likened to a king, who would take an account of his servants. And when he had begun to take the account, one was brought to him, that owed him ten thousand talents. And as he had not wherewith to pay it, his lord commanded that he should be sold, and his wife and children and all that he had, and payment to be made. But that servant falling down, besought him, saying: Have patience with me, and I will pay thee all. And the lord of that servant being moved with pity, let him go and forgave him the debt. But when that servant was gone out, he found one of his fellow servants that owed him an hundred pence: and laying hold of him, throttled him, saying: Pay what thou owest. And his fellow servant falling down, besought him, saying: Have patience with me, and I will pay thee all. And he would not: but went and cast him into prison, till he paid the debt. Now his fellow servants seeing what was done, were very much grieved, and they came and told their lord all that was done. Then his lord called him; and said to him: Thou wicked servant, I forgave thee all the debt, because thou besoughtest me: Shouldst not thou then have had compassion also on thy fellow servant, even as I had compassion on thee? And his lord being angry, delivered him to the torturers until he paid all the debt. So also shall my heavenly Father do to you, if you forgive not every one his brother from your hearts. (St. Matthew 18:23-35)

You could be on your death bed, having received The Apostolic Pardon, having given your last confession, closing your eyes thinking that you will eventually be in Heaven when Jesus tells you  the awful words to depart from Him because He never knew you.

If you do not forgive others for the wrongs that they have committed against you - really forgiven them - it does not matter if you have received The Last Rites. It does not matter if you spent an entire lifetime performing spiritual and corporal acts of mercy. You are going to hell. How could God forgive your sins if you don't honestly forgive the people who sinned against you?

We do not owe him merely because he gave us our lives and this world with everything in it. We owe him because He is so infinitely good that our most minor of transgressions is so repulsive to the sheer goodness of God.

As the parable says the servant (us) asks him for mercy which He gives because He is Good and Merciful. In order to honour the mercy we have been shown we are obligated to show that mercy to others throughout our life. The concept is so important that it is prominent in the Lord's Prayer: forgive us our sins as we forgive those who trespass against us.

But when we go through our life refusing to forgive others - truly forgive them - we behave exactly like the servant does in this parable: he refuses to give his debtor any more time to make amends and beats and hurts him. And like the servant in this parable when the King finds out about our actions we are going delivered to suffer eternal torture.

Jesus told us this, clearly. Do not let the sacraments provide you false comfort. If you go through life with all of the proper theological opinions, with miles of spiritual and corporal acts of mercy to your name, yet you have a "hate" list a mile long of people that offended you that you still nurse you are in danger of hell for eternity.
at November 04, 2019
Share
‹
›
Home
View web version