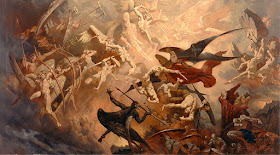 And the word of the Lord came to Jonas the second time, saying: Arise, and go to Ninive the great city: and preach in it the preaching that I bid thee. And Jonas arose, and went to Ninive, according to the word of the Lord: now Ninive was a great city of three days' journey. And Jonas began to enter into the city one day's journey: and he cried, and said: Yet forty days, and Ninive shall be destroyed. And the men of Ninive believed in God: and they proclaimed a fast, and put on sackcloth from the greatest to the least. (Jonah 3:1-5)

** PLEASE READ THE UPDATE AT THE END OF THE POST **

The apparition to Sr. Agnes Sasagawa that occurred on October 6 is a nuclear bomb in the life of the Church. Faithful Catholics are not the only ones recognizing it for what it is: Church authorities have already sprung into action and are persecuting Sr. Sasagawa for getting the message out from the seclusion that they have arranged for her.

Let's start from the beginning.

Sr. Sasagawa is not a publicity hound. She does not write letters to the pope. She does not give interviews. After the conclusion of her apparitions and the related investigation (the local Bishop approved them as genuine and Rome declined to render any further approval or judgement) she did what a Religious is supposed to do: pray. She did not bring any attention to herself.

This is a comprehensive review of the original apparitions. Sr. Sasagawa had a miraculous healing of health ailments, a statue emoted tears/blood and it was filmed on television with no explanation by the person who originally carved it and the local Bishop had no choice but to declare it genuine.

Our Lady of Akita told Sr. Sasagawa to offer sacrifices for the outrages occurring in the world. She told her that the Heavenly Father was upset and that this was the only way to soften His fury. Our Lady told Sr. Sasagawa that unless humanity changes its ways "fire would fall from the sky" and that the result would be so bad that "the living would envy the dead."

Our Lady said that after this chastisement the only "arms available" for the world would be the Rosary and the Sign left by her Son. The lack of mention about the Eucharist is extremely troubling to me.

This mention of a "sign" is echoed in St. Matthew 24:30 where Our Lord tells us that "The sign of the Son of Man will appear in heaven." That's the good news. The bad news is this occurs after Jesus tells us to run for the high ground (literally) and not even to turn back if you forgot basic necessities.

The dove-tailing of Matthew 24:30 with Akita is significant. There are also similar mentions of the same in Catholic prophecy by mystics and saints that I am not familiar enough with to write about (yet).

The new message, occurring near the start of the Amazon synod, after 46 years of silence, tells us to "put ashes on" (like the excerpt from Jonah I quoted) and to pray a penitential rosary. Unlike the initial Akita apparitions it does not tell us that by doing so we could stop the coming chastisement.

The people of Nineveh were warned by Jonah the prophet that unless they all repent that the Kingdom would be overthrown in 40 days. The King believed God and ordered the Kingdom to repent and by doing so they all saved themselves.

I do not believe we are going to be destroyed 40 days from Oct 6. But I do believe that 46 years after the miraculous apparitions, clearly of supernatural origin with a definite message, having awakened from its slumber is extraordinarily significant.

I want to note that on Oct 13, 2019, 7 days after the message was received, and on the anniversary of the Miracle of The Sun, Typhoon Hagibis hit Japan.

Events are moving fast now. This year - with the fire at Notre Dame on Holy Week, the open apostasy proclaimed in Rome, the invocation of a dragon spirit in the Holy Place - has been extraordinary.

And we are approaching the 7-year mark of Francis in a few months, the 7 year period of time being one that has eschatological value that I suggest we all keep ourselves attuned to.

Fire falling from the sky where the living would envy the dead. Humanities comeuppance for elevating ourselves to worship in the place that is rightly reserved for God. Did anyone really expect God to stay silent while we killed millions of babies in the womb, with screams that only he could hear? Did you think God would do nothing after Satan recruited a generation of priests to do his evil will while attempting to destroy His Church?

God is doing something. And He's about to do a whole lot more.

“I wish it need not have happened in my time,” said Frodo. “So do I,” said Gandalf, “and so do all who live to see such times. But that is not for them to decide. All we have to decide is what to do with the time that is given us.”

Our Lady of Akita, pray for us.

St. Michael the Archangel, defend us.

Our Lord, have mercy on us.

40 days from October 6, 2019, when this new message was received by Sr. Sasawaga, is November 15. 40 days is the amount of time the Kingdom of Nineveh was given to repent. Here is the Gospel reading in the Ordinary Form on November 15:

Jesus said to his disciples: “As it was in the days of Noah, so it will be in the days of the Son of Man; they were eating and drinking, marrying and giving in marriage up to the day that Noah entered the ark, and the flood came and destroyed them all. Similarly, as it was in the days of Lot: they were eating, drinking, buying, selling, planting, building; on the day when Lot left Sodom, fire and brimstone rained from the sky to destroy them all. So it will be on the day the Son of Man is revealed.
On that day, someone who is on the housetop and whose belongings are in the house must not go down to get them, and likewise one in the field must not return to what was left behind. Remember the wife of Lot. Whoever seeks to preserve his life will lose it, but whoever loses it will save it. I tell you, on that night there will be two people in one bed; one will be taken, the other left. And there will be two women grinding meal together; one will be taken, the other left.”  They said to him in reply, “Where, Lord?” He said to them, “Where the body is, there also the vultures will gather.”

I am not saying that something massive is happening on November 15. I am saying that I feel extremely uneasy about all of this. "Date setting" future apocalyptic events is dumb. A reader on Twitter named Steven O'Reilly noticed the connection with the November 15 readings and sent it to me and I posted it on here because I found it interesting. It is always a good idea to stay in a state of grace and going to confession. "No one knows the time or date."