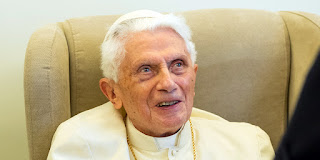 "No one is richer, no one is more powerful, no one is freer than the one who knows how to abandon himself and everything and put himself in the lowest place."
Imitation of Christ II, 11, 4

I always got the feeling that Benedict "retired" in February 2013 to serve as a watchman - of his successor, of new theological movements, of his enemies, of the wolves within the Church. Absence makes the heart grow fonder and you can be sure that Benedict counted on a renewed sense of love and loyalty for him and his pontificate borne from absence to give weight to his thoughts.

Do not be fooled: Benedict does not think much of the Francis pontificate. Benedict has not endorsed a single major initiative of the the Francis regime, even after being practically begged by the Vatican to do so. The only fig leaf that Benedict has thrown Francis way is a vague feeling of warmth towards Francis, which, in Benedict's old age, might be gas.

But on what hill, exactly, would Benedict chose to make war?

I spend a decent amount of time reading the writings between Catholic intellectuals who disagree with one another profoundly. They are always kind to a fault and careful to couch their disagreements in a general sense of unity. Benedict and Cardinal Sarah, his co-author, have apparently decided to no longer play that game:

“Like Augustine we can say: ‘I cannot be silent! I know indeed how pernicious silence would be for me….It is to Christ that I will have to account for the sheep entrusted to my care. I can’t keep quiet or pretend ignorance.”

A living pope and a high-ranking Cardinal are saying out loud that the current occupant of St. Peter is journeying down the path that would cause the sheep of St. Peter to be slaughtered. This is an open invitation to battle between two camps in the Church that are deeply at odds.

An old, feeble man and a Cardinal who has sworn to obey the very person that he is accusing of  forsaking Christ against the pope, almost all of the world's bishops and cardinals, the Vatican and mainstream media and much of the Catholic intellectual establishment.

I sense that Benedict feels that his time is growing short and that he seeks for his long, noble life to end on a note of sacrifice for Christ. He knows that he will be torn to shreds by Team Francis for this. I don't think he cares. His worry is the judgement of Christ, whom he will be meeting soon.

That makes this an act of sacrifice and of martyrdom. Cardinal Sarah, based in Rome, who hears much of what is being planned, must be genuinely shaken to have taken this step. He must have heard that the post-Amazon exhortation is truly odious and faithless. He must know that it is time to pick a side.