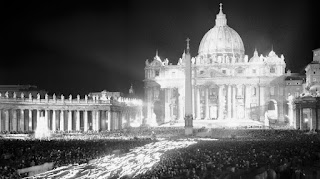 "The Church today is going through a moment of anxiety. Some are practicing self-criticism, one might say to the point of self-destruction. It is like an acute, complex internal uheaval that no one would have expected after the council......The Church is being struck by those who are part of it." - Paul VI, Discourse at the Lombard Seminary in Rome (December 7, 1968)

If you want to know why Pope Benedict XVI and Cardinal Sarah felt compelled to release "From the Depths of Our Hearts" you would do well to re-read this article from early December by Lifesite.

I am not sure how much of the chatter surrounding Francis' plans Benedict hears - or wants to hear - but I do know that Cardinal Sarah hears all of it. Prefect for the for Divine Worship and the Discipline of the Sacraments, Sarah is a faithful Cardinal but also a man who has been in the Vatican a very long time.

It is unquestionable that he knows what Team Francis plans to include in the upcoming "Exhortation" springing from the Amazon Synod. The same people talking to Kasper are talking to Sarah. The content of what is to be included so alarmed Sarah - and apparently it reached the ears of Benedict - that they decided to release this remarkable intervention in the Church and public defiance of Francis and his well-known plans.

If Kasper is saying that the Exhortation will exceed the recommendations of the Amazon Synod, all bets are off. The Synod proposed truly radical change - married men of proven virtue in, but not limited to, the Amazon, exploring ordained female deacons, the creation of an Amazonian rate - so what does "go beyond" mean?

Francis is not a particularly scholarly individual but he does possess a certain low-cunning. He is a political animal, like Paul VI, interested in politics and politicians as much or more than he is interested in Church affairs. I would not put it past him that he sets off a bomb - "making a mess" he calls it - when he finally releases his letter. All indications point to that indeed being so.