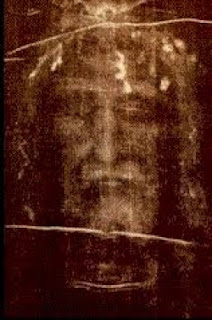 "But Peter rising up, ran to the sepulchre, and stopping down, he saw the linen cloths laid by themselves; and went away wondering to himself at that which was come to pass." (St. Luke 23:12)

The Holy Shroud of Turin is genuine.

There are many, many reasons to believe so. I have absolutely no doubt - zero - that the Shroud is a genuine article. In the year 2020 AD, with all of the amazing technology of the day, it is impossible for any person to replicate the qualities of the Holy Shroud with modern technology...yet we are to believe that medieval forgers using no technology at all created this Holy article. I'm not even going to dignify that fraudulent "carbon dating" test of 1989 with a response - it has already been debunked thoroughly by non-partisan scientists the world over. "In any form of inquiry or scientific discipline, it is the weight of evidence which must be considered conclusive. In archaeology, if there are ten lines of evidence, carbon dating being only one of them, and it conflicts with the other nine, there is little hesitation to throw out the carbon date as inaccurate."

God is good, always, and the fact that he foresaw the spiritual difficulties of our age and planted this beautiful present for us - the 1898 shock photo negative that shows Our Lord in his Crucified state - to straighten our faith is a testimony to the wonderfulness of the God that we serve.

Excerpt from the book Miraculous Images of Our Lord, pp 204:

The wounds of the scourging have been numbered by one examiner as being between 90 and 120. Another counted 200 wounds. Both agree that the wounds were produced by a dumb-bell shaped instrument identical in size and shape to the Roman flagrum. It was apparent to these examiners that two men inflicted the wounds, the one on the right being taller, more aggressive and sadistic than his companion on the left.

Photographs of the Shroud were taken for a second time during an exhibition in 1931...in attendance at this 1931 exhibition was a young priest, the future Pope Paul VI.

The holy relic was enshrined in peace until October 1, 1972, when a deliberate attempt was made to destroy it by fire, The perpetrator remains unknown, but because of the asbestos inside the reliquary, his efforts were unsuccessful and the Shroud survived.

During the firsts televised exposition of the Shroud the year following the attempt, Pope Paul VI recalled his emotions when he saw the Shroud at the 1931 exposition: "It appears so true, so profound, so human and so divine, such as we have been unable to admire and venerate in any other image."

Demons sent by hell to destroy an item that could cause millions to revert/convert to the Faith? Check.

If Hell knows the power of the Shroud, so should we.

The Vatican, to initiate a revival of the Catholic Faith, and to spark a media frenzy that shakes complacent people out of their materialistic stupor, should immediately declare the Holy Shroud of Turin Worthy of Belief.

All of the Bishops in the World should be there. It should be exposed publicly for the ceremony and everyone should bow and pray at this image which clearly shows the torture that Our Lord endured for our souls.

Sacred Heart of Jesus, Pray for Us.
Christ the King, Have Mercy on Us.
at January 27, 2020
Email ThisBlogThis!Share to TwitterShare to FacebookShare to Pinterest
Newer Post Older Post Home