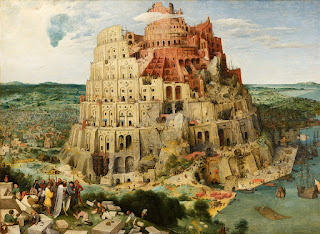 Be merciful, spare us, O Lord.
Be merciful, graciously hear us, O Lord.
From all evil, (*Deliver us, O Lord)
From all sin*,
From Thy wrath*,
From sudden and unprovided death*,
From the snares of the devil*,
From anger, hatred, and all ill-will*.
From the spirit of fornication*,
From lightning and tempest*,
From the scourge of earthquake*,
From plague, famine and war*,
From everlasting death*.
- Litany of the Saints


Coronavirus, or COVID19, looks like the graveyard of Globalism.

We spent so much time building a world of seamless global transportation and global commerce, because we could, that we didn't spend any time thinking about whether or not we should.

I have been watching the virus carefully now, for six weeks, refraining from writing about it because alarmism and unwarranted fear do not help anybody. The common flu infects and kills tens of thousands of people a year, right? SARS petered out and was contained, right? Perhaps being prudent about sounding the alarm over Coronavirus was the right way to go.

I wanted to see if the Chinese could stop the spread of the virus. They report numbers of new cases, and new deaths, every evening at 7 PM EST.

I wanted to see if the virus stayed within the geographic borders of Southeast Asia.

I wanted to see if the mortality rate of the virus was high.

Now, I have answers, and I can honestly say that alarmism is warranted. Coronavirus is going to be the story of 2020. For example, I believe that the Summer Olympics is going to be cancelled; that there is going to be a stock market panic later on in the year; that this will be a pandemic that will end up being comparable to the Spanish Flu (which ended up killing between 40-55 million people).

Has China stopped the Spread of the Virus?

The Chinese, by the nature of their authoritarianism, have been able to use methods to stop the virus that would never  be tolerated in the West. They have quarantined entire cities. They put machine guns in the face of random people and force them to go to the hospital. They create concentration camps overnight to hold thousands of people that might have the virus. They shut down local media to prevent the spread of information. The police, and the army, have the right to detain anybody indefinitely. 760 million people are living under quarantine.

And yet all of these extreme methods has not been able to slow down, one iota, the spread of the virus. The official numbers demonstrate that new cases have doubled. Videos from region show people collapsing in the streets. Even relying on official governmental figures, the death rate for the virus is 2%, which is higher than SARS. Western medical professionals have guessed that the mortality rate could be as high as 4% (4% of 7 billion people is 280 million).

Senator Josh Hawley (R-MO) let the cat out of the bag: the Chinese are completely overwhelmed.

The virus could not be contained by an extremely technologically advanced, organized, authoritarian government.

Has the virus stayed within the geographic borders of Southeast Asia?

This is all new news from the last 24 hours:

Coronavirus epidemic is getting severe in Japan and South Korea. Problems with coronavirus test in the US may impede full disclosure of outbreak there. Current flu season in the US is serious. Whether it is related to the coronavirus is worth vigilance.
— Hu Xijin 胡锡进 (@HuXijin_GT) February 21, 2020

As of two weeks ago there were less than 10 cases, total, outside of China.

Is the mortality rate of the virus high?

A purely HYPOTHETICAL simulation of how a disease LIKE coronavirus can spread in a population. With only a 2% mortality ratehttps://t.co/Pib15PfuYp pic.twitter.com/O51RIFQfm5
— Phlip (@Pen_Bird) February 21, 2020


A typical response from people on the Coronavirus, in the early stages, was "it's no worse than the common flu!"

In Hubei, where it has overwhelmed the capacity of the Chinese to control it and to effectively treat all patients, it is 18%"

In other words, it is anywhere in between 10-53x more fatal than the common flu. The Spanish Influenza, which killed 40-55 million people in a world that only had 1.8 billion people, was around these levels.

What is the bottom line here? What are the theological implications for Catholics, in all of this?

The bottom line is this:

- This is behaving, and spreading, at exactly the rate that scientists imagined a global pandemic would.
- The virus is more lethal than SARS, more adaptable than H1NI, more versatile than the Spanish flu.
-  It takes time for a virus to go truly global and become unstoppable. Unlike movies, where it happens in real time, it can take a full year before a pandemic becomes unstoppable and omnipresent. There are whispers among health professionals that the United Kingdom modeled out what this looks like and they project, in a realistic scenario, 500,000 cases of Coronavirus cases in the United Kingdom by Christmas.

The Achilles Heel of Modernism has always been that it relies on economic prosperity. In times of plenty, in times of economic success, the idea of humbling yourself before a powerful God and begging His intercession sounds unnecessary. The proud and strong do not want to beg for the protection and mercy of a loving God. They are gods in their own minds.

A global pandemic, because of the nature of the world's financial system that relies on debt and constant growth, would be the complete destruction of worldwide prosperity. Governments would default (they are at record high levels of debt, everywhere in the world), Banks would fail, ATM's would stop dispensing cash. Public order would cease.

And there is about to be an interruption. A big one. As I said, I doubt that the Summer Olympics in Japan will happen at all. I believe they will be cancelled, Japan being a country on the verge of a major outbreak of cases.

I believe that this fall will see a stock market crash, right in the middle of a presidential race (echoes of 2008), that will have unknowable consequences.

We are not ready for what's coming. Somewhere, out there, the virus is spreading. It is oozing through the pores of the globalist system that we have erected. It will shock some out of  complacency. We must be ready with prayers for the conversion of sinners and the preservation of human life. And we must be mentally ready for our lives to change in ways that we cannot currently foresee.