Covid-19 Has Demonstrated That the Salt Has Lost Its Savour 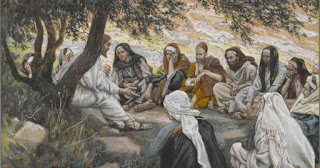 Blessed are ye when they shall revile you, and persecute you, and speak all that is evil against you, untruly, for my sake: Be glad and rejoice, for your reward is very great in heaven. For so they persecuted the prophets that were before you. You are the salt of the earth. But if the salt lose its savour, wherewith shall it be salted? It is good for nothing any more but to be cast out, and to be trodden on by men.

Last year, Good Friday 2019, I remember noticing that it wasn't being treated by the populace like a real holiday. Media personalities were all working; most businesses were open; people were out and about living their lives without a care as to what that day meant.

The most important event in world history - the crucifixion of Christ - seemed to be far from the minds of almost everyone. The indifference of it all must wound Our Lord immensely.

President Trump had told an interviewer that he hoped to have people living their normal lives by Easter Sunday, because that would be a "beautiful thing." Trump, being 72, is old enough to remember when people actually cared about Easter; when it was a monumentally significant day of celebration and joy.

"Easter" was the #1 trending topic on social media for almost a full day.

The general gist of the response was that no one cares about Easter and that it was an odd (and unrealistic) day to plan for.

This episode demonstrates, yet again, that the West, all of the West, is no longer Christian in any meaningful sense of the word. It is, in totality, pagan. It stopped believing a long time ago and the newest generation has just decided to not even pay lip service to its Christian heritage, because it has new gods now.

The new gods of the West are pleasure and self, in that order. They are the only things that matter. The cardinal rule of the West in 2020 is to not infringe on anyone else's pleasure or their conception of self with judgement or prohibitions.

Considering that the vast majority of the Church hails from the West this is a catastrophic development. The complete meekness of Church leaders in the face of governmental orders has been telling, and it reflects the indifference and meekness of the laity.

The holiest time of year has been cancelled, and hardly anyone gives a damn. Church leaders were volunteering to end Mass before the authorities asked them to. Then they volunteered to lock Churches even without being asked. Now, they are actively prohibiting people from seeking the sacrament of reconciliation.

In another universe where the Church fought like warriors to administer the sacraments to the sick and to the laity in this time of plague, it would have served as a revolutionary testament our dedication to our faith to the world, exactly as it did in plagues past. The message that people would have received would have been: they take this seriously. They are risking their lives for the administration of the Sacraments They are true believers.

Who could say that now? They could have held Masses in huge Churches with fewer than 25 people in at a time, but hold more Masses to make sure everyone who wanted to attend could. They could have set up a system of personally visiting people at home to receive the Sacrament of Reconciliation. They could have objected to political leaders that this was the holiest time of year and that living our Faith during Holy Week was not a request, it was an expectation. There are a thousand ways that the sacraments could have continued to been administered and the public health been preserved. We are so creative in every aspect of our lives, except this one, apparently.

But they chose not to do that. And more worryingly, the laity didn't ask them to. It seems like we all know who our master is that MUST be obeyed - and it is the government, not God.

What is God supposed to do with a world that is poisoned with such indifference and hostility to Him?

The Gospel excerpt above is interesting in this regard. Our Lord contrasts the faith of martyrs with salt having lost its savour. It is an interesting sequence of speech, and like everything in Sacred Scripture, it is there for a reason.

Christ seems to be telling us that when the Salt of the World declines to be reviled, to be persecuted, to be slandered, it will have lost its savour. And what happens to salt that has lots its savour? Christ tells us that it is good for nothing but to be trampled on by men.

I suspect, that after this virus passes, that is where we are headed .During the holiest time of year, Lent, the prelates and laity of the Church were given an opportunity to prove our love and devotion to the Lord and to the spiritual health of each other, and we not only failed, we helped the persecutors smother the Sacraments. What good is the salt now?

We are about to be trampled on by men, when this is over. Mark my words.
at March 26, 2020
Email ThisBlogThis!Share to TwitterShare to FacebookShare to Pinterest
Newer Post Older Post Home