The Vatican II Church is Falling, and they don't even know it yet 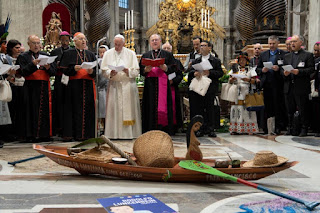 How is the faithful city, that was full of judgment, become a harlot? justice dwelt in it, but now murderers. Thy silver is turned into dross: thy wine is mingled with water. Thy princes are faithless, companions of thieves: they all love bribes, they run after rewards.

Let it be shown at my judgement that I tried to give Francis the benefit of the doubt. I tried to read his words charitably, to not assign ill-motives to his words. Time however has proven me wrong, and many of you correct instead.

News hits us, and we forget about what we read. We are not good at remembering. We get numb to it all because it is hard to maintain a sufficient level of outrage over time. The bad guys count on this. It makes their lives easier. Most of us are so busy (or distracted) that we do not fit all of the puzzle pieces together and we certainly do not spend time thinking about the big picture that the puzzle shows.

The planet cannot take revenge, because the planet doesn't have a soul. It is not conscious. It is not self-aware. It is a created object with abilities to heal and sustain itself, like most created objects but it does not have the ability to "take revenge" because it is not created in the image and likeness of God.

Even if the planet could take revenge, which it cannot, so what? And fear ye not them that kill the body, and are not able to kill the soul: but rather fear him that can destroy both soul and body in hell. Our fear, our Holy fear, should be directed at God (please note that in this passage Our Lord specifically says that we *should* fear God) because our status with Him determines our destiny for eternity.

Why would Francis have his priorities so badly mangled? Does he truly fear God?

The truly awful thing about this story is that a neighbor heard a church organ and decided to call the police. Imagine being so consumed with hatred of God that you decide to take it upon yourself to call the police on a Church service and stop the worship of God.

The police came, behaved like baboons, and shut down the service. They must have gotten a thrill that they were more powerful than God, because they were able to shut down a service devoted to Him. While the worship of God by a small congregation was deemed too dangerous to proceed, French women were still allowed to murder their unborn children or buy alcohol and drugs from local dispensaries. 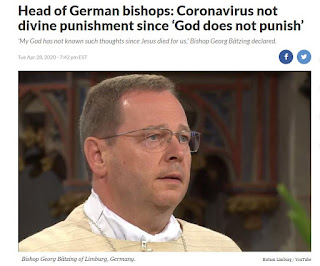 This is the mindset that you need to be a modernist Bishop. How do you justify services that are irreverent, sacrilegious communions, heretical theology and prayers with religions that "worship devils?"

You can only justify those things if you either believe that a.) Catholicism is nonsense b.) God does not really punish anyone for sin c.) hell doesn't exist.

All pain and suffering is a punishment for sin. This is Catholicism 101. God, in his goodness, uses pain and suffering to call us back to Him. This is also Catholicism 101. The Bishop believes that since Jesus died for us God does not have these thoughts. Jesus told us otherwise: “I have a few things against you: you have some there who hold the teaching ... that they might eat food sacrificed to idols and practice sexual immorality. Therefore repent. If not, I will come to you soon and war against them with the sword of my mouth.”

There is also the entire book of Revelation that goes into long detail the fallen state of the world near the end of time and the punishments for sin, sent by God, to a fallen world.

The irony here is tremendous. Bishop Batzing is the new head of the German Bishops' Conference and he recently gave an interview asking for legalized sodomy, married priests and ordained women. He literally listed the sins quoted in the excerpt of Sacred Scripture that I posted above that so angered Jesus.

Bishop Batzing is falling, and he doesn't even know it yet. 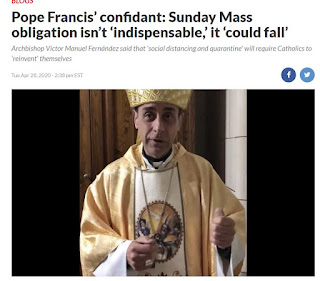 Here is the kicker. If you believe that the Church has been infiltrated, that men from within are working for its destruction, this is strong grist for your belief. For a Bishop to be covertly working towards the end of fewer people attending Mass is evil. Completely, irredeemably, evil. Mass is where the Mystical Body of Christ receives its daily bread, and you would only not want that to happen if your desire was to starve and eventually kill that Body.

Can you imagine the dozens of decisions this person makes, every day, that impact the faith of the people in his care? Would you trust this person to make any decisions whatsoever?

I do not wish to depress you, but these headlines have all occurred in the last 10 days.

The puzzle, when put together, is clear: the Bishops, including Francis, have fallen. They don't really believe all of that stuff. Some of them are actively working against the Church.

Does this sound like a clandestine war to you? Maybe it is. Maybe the complete shut down of the Novus Ordo around the world, and the exposure of these Bishops that has subsequently occurred, is for our spiritual good. It has demonstrated that most of them, including Francis, view the Church as non-essential. I think this represents a demarcation line with God. God does indeed punish, and cleanse, and redeem. I have a feeling that process is well underway. These apostates believe that all is well; they can't see that the flood is coming.
at April 29, 2020
Email ThisBlogThis!Share to TwitterShare to FacebookShare to Pinterest
Newer Post Older Post Home