Can a Catholic Pope tell an autistic child "maybe we'll see each other in hell?" 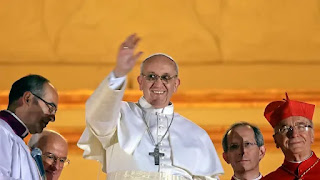 Crux, a mainstream Catholic news outlet, reported this morning that Francis was....oh, you won't believe me unless you read it for yourself (h/t NovusOrdoWatch):

Pope Francis closed the call offering the family his blessing and asking for prayer, but not before making a small joke with Baruffi, who told him that, “We pray a lot for you, but you don’t need it, you are already a saint.”


Jesting, he laughed, and said, “Who knows, maybe we’ll see each other in hell?”, to which Baruffi said, “I think for you no, but us perhaps. We’re a little bit mean with everyone in this situation.”

Lest you do not believe me....it's on video!

What kind of demented ghoul responds to a child telling him "you are already a saint" with "we'll see each other in hell?"

Can a Catholic Pope say such things?

As a side note....anyone else find that picture of Francis post-Conclave to be incredibly creepy? It's from an international wire service so it wasn't doctored in any way...the orange/fire background, the creepy smile, the monster Cardinal Daneels in the corner grimacing/trying to smile....everyone looking apprehensive. Creepy.
at May 02, 2020
Email ThisBlogThis!Share to TwitterShare to FacebookShare to Pinterest
Newer Post Older Post Home