The Big Read (Part 1): Catholics Need to Forget Evangelical Notions of the End Times and the Antichrist 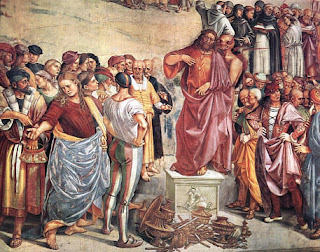 Do you know of this book series?

Even if you haven't read this book, or the entire series that it spawned, and even if you are not familiar with Evangelical thinker Tim Lahaye, I guarantee that you are familiar with his concepts of the End Times that are reflective of fundamentalist/evangelical Christianity in the West.

In short, they are summarized like this: in the last days a Global Government will arise that will be headed by the Antichrist. It will require all people of the earth to take a physical mark on their bodies in order to participate in commerce, that in reality, is the "Mark of the Beast" that destines anyone who accepts it to eternal damnation. Christians will resist The Mark and will be persecuted by the Antichrist and his Government unto death. Many people convert to Christianity amidst the perseuctions, recognizing what is happening. At the end, Jesus comes back, defeats the Antichrist, and the good guys win.

You have probably seen hundreds of references to the Antichrist, the Mark of the Beast, Global Government, etc in movies, books, newspapers. It's entered into the wider culture. It is, weirdly, conventional wisdom. That's why when a new nanotechnology is created, the media sometimes make Mark of the Beast quips. That's why people have resisted the United Nations, seeing each power grab as a precursor to the New World Order.

But this is NOT Catholic teaching on the last things. Many well-meaning Catholics have internalized these false fundamentalist beliefs.

Let's start off with the completely obvious. Our Lord told us that He will return as a thief in the night, that is to say, completely unexpectedly. If the events of the conventional wisdom of the End Times were to happen - global government, antichrist, persecution, mark of the beast, mass murder of Christians - it would be GLARINGLY OBVIOUS that Christ was about to return.

Christ told us pretty clearly what the state of belief would be upon his return: "But yet the Son of man, when he cometh, shall he find, think you, faith on earth?" (St. Luke 18:8). There is no revival of the Church at the end. There is no reception of mass numbers of new converts into the Church. There is only a beleaguered, beaten down, confused minority that has held fast to the Faith in the midst of severe religious persecution.

The header picture to this post is Luca Signorelli's 1501 depiction of the antichrist, from the Orvieto Cathedral in Umbria, Italy. It was painted by a Catholic and displayed in Catholic cathedrals. It demonstrates, I think, some important truths to internalize.

The painting does not portray the antichrist as a military leader. It paints him as a spiritual leader. It demonstrates the truth that is at the core of Catholic teaching: antichrist will offer the people a faith that most people will accept. He will tell them things that are pleasing to their ears, he will be able to perform miracles, and the world will worship him.

The Mark that is described in Revelations always struck me as a form of baptism - since Satan enjoys perverting the goodness of God, this would not be surprising. The language used about "not being able to buy or sell" unless one has the "mark" points to a kind of economic and social marginalization of people who do not belong to this new religion or share its values.

Satan is not a cartoon character that is going to behave like an actor with lines to fulfill. He hates God and is trying to destroy God's Church. It will not be obvious when his puppet sets up shop. Many will believe the lie and the Church will be in severe distress, not from outward persecution, but by the apostasy and DOUBT of its hierarchy and laity. That's the final persecution of the antichrist.

Before Christ's second coming the Church must pass through a final trial that will shake the faith of many believers. The persecution that accompanies her pilgrimage on earth will unveil the "mystery of iniquity" in the form of a religious deception offering men an apparent solution to their problems at the price of apostasy from the truth. The supreme religious deception is that of the Antichrist, a pseudo-messianism by which man glorifies himself in place of God and of his Messiah come in the flesh.