We are going to be quarantined for Christmas, because Coronavirus is a dagger aimed at the heart of the Church 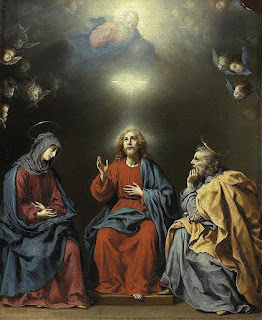 Human history that matters, that really matters, is Church history.

If you believe that the events of this pandemic have been aimed at the Church - like daggers, that the men of the Church cannot see - then this is not over. Shuttering Churches worldwide for Lent, and then Easter, was a coup for the Satanists who comprise the creme of the global power structure.

The people who have miraculously held on to their Catholic Faith - through Vatican II, through the pedophilia scandals, through effeminate clergy, through the financial scandals, through a modern world that treats faithful Catholics like pariahs - had one of their few remaining consolations taken from them: the ability to go to Mass, to pray, to be around other faithful Catholics, to kneel before God Himself, to receive the Sacraments, to sing the praises of God in public, to worship freely.

Look at current events through that lens and think about what has happened simultaneously with the shutdown of Church life. Francis has accelerated his plans for an amalgamation of religious practice among every faith group. He has said that people who are not in the Church were justified by Our Lord's passion. China has been accelerated the destruction of Churches and the public displays of the Cross. Social media giants have censored alternative news sources. Governments are using the crisis to confiscate weapons. Central banks are printing money by the trillions and literally handing it over to the wealthiest elites in society. The global food supply chain is breaking down. Unemployment is at levels not seen since the Great Depression. People are scared, broke, sick, mentally breaking down.

If the coronavirus was meant to destroy the life of the Church, the Advent season cannot proceed. There can be no worship of the infant Jesus, no reminder of the Hope that he brought into the world, no celebration or mirth at the love that tells us to "be not afraid."

A second wave of infections is coming. The virus is useless at spreading to new hosts in the outdoors, but it has shown tremendous resilience in holding on in sufficient numbers through all forms of containment. Our leaders will shut down everything again, but with no prospect of warm weather on the horizon, the quarantine will last all winter. Food supply chains will break. Governments will no longer be able to print trillions to sustain the economy during its hiatus and inflation will arrive.

And Christians will not be able to worship Jesus at their Churches on Christmas. Count on it. The combination of the virus, an apostate pope and bishop hierarchy, worldwide depression and mass house arrest is the method of the Luciferian elite to wipe the remnant of Christianity from the world and instill their own master as its king. We are in the thick of it now.
at May 05, 2020
Email ThisBlogThis!Share to TwitterShare to FacebookShare to Pinterest
Newer Post Older Post Home